GPUrdma is a GPU-side library for performing Remote Direct Memory Accesses (RDMA) across the network directly from GPU kernels. 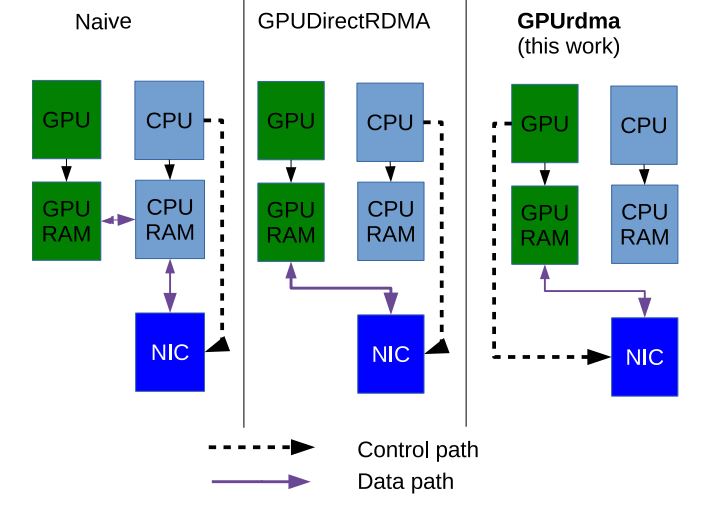 GPUrdma differs from previous works in that the CPU is completely bypassed, executing no code relevant to GPU communications. As a result, GPUrdma provides strong performance isolation of GPU communications from the CPU workloads.

We implement the basic support for GPU-side RDMA using an NVIDIA K40c GPU with 15 streaming multiprocessors (SMs) and a Mellanox Connect-IB HCA supporting FDR (56Gbit/s). In our experiments, we invoke a GPU kernel with a single thread that issues 1024 RDMA write requests. This number of requests fits into the work queue of a single QP. We observe that the maximum bandwidth is about 43Gbit/sec, and it is achieved for very large (1 MB) messages. Smaller messages of up to 32KB achieve only 15Gbit/sec, less than one-third of the maximum network bandwidth.

We apply the following optimizations:

We increase the number of QPs to leverage multiple GPU threads to concurrently create multiple transfer requests. It is important to note that the use of multiple QPs is a well-known optimization for CPU transfer performance. As we show, however, this optimization has a dramatically positive effect on GPU performance. We achieve a bandwidth comparable to the QP-per-warp case, reaching 50 Gbit/sec with 16KB messages, with better scalability with respect to GPU memory consumption. 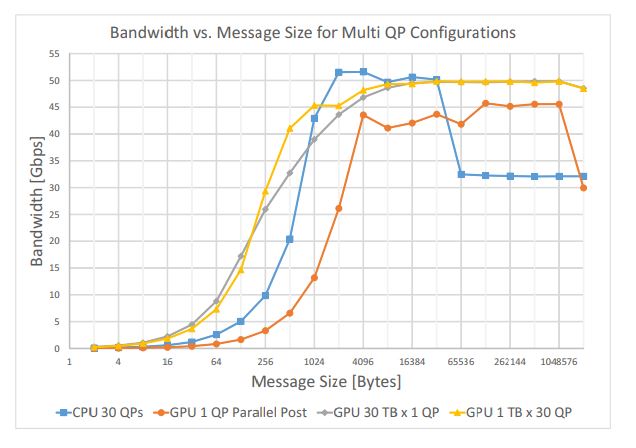